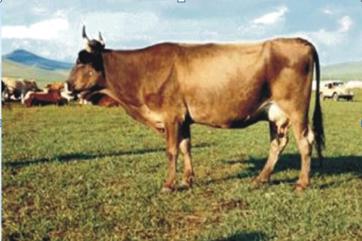 It was selected in 1950 under scientific and methodological guidance of Kazakh Research Institute of animal husbandry, with the participation of scientists from Kyrgyz Research Institute of livestock production, VIZh and AZVI, by crossing local cattle with Schwitz breed. Color brown.
Competitive qualities: high protein and fat content of milk, meat production, resistance to leukemia and mastitis, adaptive ability to many natural and climatic zones of our country and abroad. Live weight of bulls 850 – 1000 kg, cows – 500 – 600 kg. The gain of bull-calves on fattening is 800-900 g per day, slaughter yield – 53-60%. Good quality meat. Milk yield of 4000- 4500 kg per year. The fat content of milk – 3.8-4.06%. 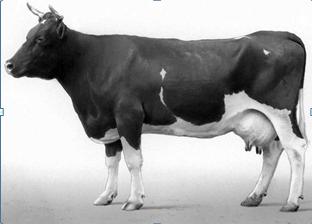 It was bred in Kazakhstan and Kyrgyzstan in 1952, under scientific and methodological guidance of Kazakh Research Institute of Animal Husbandry, with the participation of scientists from Kyrgyz Republic, VIZh and AZVI, crossing local and Dutch cattle. Color is predominantly black and mottled. Aulieata breed is characterized by its adaptability to highlands with hot climate and natural resistance to blood-parasitic diseases.
Live weight of bulls 800 – 950 kg, cows 450 – 530 kg. Yield of milk 3000-3800 kg per year, a record 9988 kg. Fat content of milk 3,7 – 3,8%.
Aulieata cattle are well fattened. It’s breed in farms of South Kazakhstan, Zhambyl and Kyzylorda oblasts. 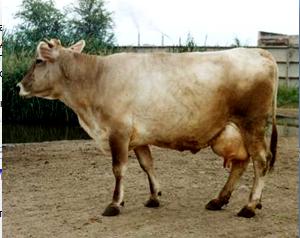 In 2007, Kazakh type of brown dairy cattle Aqyrys was generated and tested on the basis of selective breeding work of Alatau breed, with reproducing and improving it by bulls-producers of Schwitz breed of American selection. Live weight of cows is 500-550 kg or more, calves at birth – 35-38 kg. In 18 months of age , youngsters has a mass of 350-400 kg, and fattened bulls 450-500 kg. Milk productivity is high, but lower than that of specialized dairy cows. Only in breeding herds there are 4322 cows with an average milk yield of 4949 kg with fat content of 3.86%. 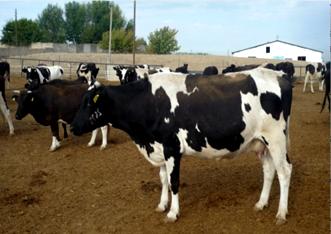 With improvement of Aulieata livestock, the bulls’ seed of lineage Holstein breed bulls, black and motley type of dairy cattle “Sairam” with the genetic potential of milk productivity of cow uterus from 9000-10000 kg of milk for lactation. Animals are characterized by purely milky type of physique, well developed udder, and correctly placed limbs. Average live weight of full-fat cows is 502 kg, heifers 464 kg, bulls 786-800 kg. Average milk productivity of cows for the first lactation is 4,800 kg of milk, for full-fat 5000-5500 kg, with a fat content of 3.8-3.9%, protein 3.1-3.2%. 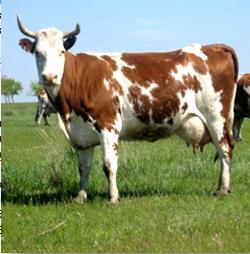 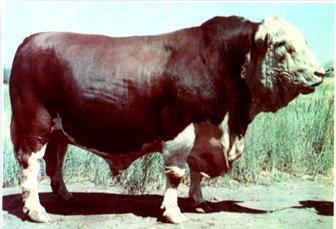 It was selected as a result of joint work of scientists of Kazakh Research Institute of animal husbandry, the All-Union Institute of Livestock and breeders-practitioners by reproducing and absorbing breeding stock of local (aboriginal) Kazakh and partially Kalmyk cattle with bulls of Hereford breed. Tested in 1950. From parents breed inherited positive properties: high adaptive and reproductive ability, strength of the constitution, precocity and meat productivity. Animals are well expressed meat type. Bulls are characterized by live weight of 850-1000 kg, cows – 500-550 kg; record levels in best breeding herds by bulls – 1200-1400kg, cows – 650-1038kg. At intensive nurture of gobies by 15-18 months of age reach of 450-470 kg. Animals are well-fed and fattened. In the process of improving breed, selection is carried out to increase the duration of the period of intensive growth.
By means of a two-stage evaluation of bulls, we found an improvement with the potential of an average daily increase of 1000-1200 g from 8 to 15 months of age. The breed is differentiated by four zone hummel types and 21 factory lines, approved as breeding achievements. They are characterized by an increased rate of growth of young animals from 6 to 10% in comparison with peers and by 23-31% relative to breed standard. Distributed in all regions of Kazakhstan. 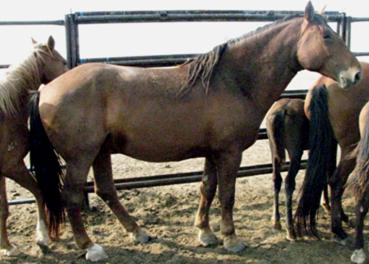 Kushum breed – meat-and-milk ptoductivity. It is breed in 1976 on the basis of complex reproductive crossing of local Kazakh mares with trotting, thoroughbred riding and Don stallions.
Color is red, bay, brown, dark bay, black. Live weight stallions 590 kg, mares 520 kg. Weight of carcass of 2.5 year old stallions is 280 kg with slaughter yield of 53%. Milk of mares is 2100-2200 liters per year.
Horses of Kushum breed favorably differ from other breeds by economically useful qualities as early maturity, fertility, high meat and dairy productivity, good adaptability to year-round pasture-herd keeping and thrifty of nurture.
As a result of long-term, scientifically grounded selection and breeding work with Kushum breed horses, purebred breeding has created highly productive factory lines of stallions: Krepysh, Grom, Samozvet, Laskovoy, Khitrets and Baikal, characterized by high live weight: stallions – 605 kg, – 520 kg. Based on the use of linear stallions and mares, the factory types “Rza-Aktobe” and “Zhangali” were created. The creation of these plant types promoted breeding and productive qualities of breed. Their selection increase in live weight: stallions – 92 kg (18%), mares – 44 kg (9%). Stallions weight index reaches up to 147%. 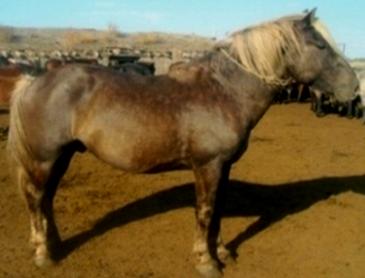 Kazakh Zhabe type horses of meat and dairy direction of productivity, created by Kazakhs over the centuries, have an exceptionally strong constitution, excellent adaptability to year-round pasture-herd maintenance.
Zhabe type are distinguished by high fertility (85-90 foals per 100 mares) and milkiness (2000-2300 l for lactation).
Meat productivity of Zhabe horses is high, with slaughter of 9 years old mares, average weight of carcass reaches 253.2 kg with slaughter yield of 55.5%, and of 2.5 years old Zhabe foal’s weight of carcass reaches 226.8 kg, slaughter yield is 57.4% . In carcasses of foals for 1 kg of bones is 4.7 kg of pulp. Meat of Zhabe youngsters is distinguished by its high nutritional value. Highest calorie content of Zhabe foals’ meat is noticed at age of 18-30 and 42 months. In these age meat of foal is characterized by high content of fat and is suitable for preparing valuable national dishes, such as kazy-karta, zhal-zhaya, chuzhyk.
With Kazakh horses Zhabe has created new high-productive Seletinsky factory type, live weight of stallions-producers reaches 503 kg, mares of 450 kg. In Seletinsky factory type, lines of Brazlet, Zadornyi and Pamir were created.

of Animal Husbandry and Forage Production in 2011 on the basis of crossing Kazakh fine-fleeced uterus with rams of breed “Deutsche Merino-Fleischshaf”, imported from Germany. Live weight of rams -110-140 kg, uterus – 65-70 kg (in pasture maximum – 103 kg). Toning of wool parameters – 64-60 quality. Shearing of washed wool of uterus in flocks reaches 3,5 – 4,0 kg, fertility fluctuates from 130-140%.

Cross Alatau two-line egg cross breed white leghorn. It is created and distributed in all regions of Kazakhstan. Egg production of medial layer – 260, early – 230 eggs. The weight of egg in 52 weeks of life is 61-62 g, eggshell is white. Alatau was approved by Order of the Ministry of Agriculture of the USSR No. 92 of April 12, 1985.

Cross Medeo two-line: fatherly line – M-1, maternal – M-2. Approved by Order of the Ministry of Agriculture of the

New high-yield cross of Peking duck Arman, yield of meat per parental pair is 4.553 kg. Arman was approved on February 19, 1999 by order of the Ministry of Agriculture of the Republic of Kazakhstan №14.

Bischkul color breed. It was created jointly with scientists from the Kazakh Institute of Animal Husbandry and Forage Production and the North Kazakhstan Institute of Livestock and Crop Production.

There were created highly productive lines: fatherly line BC-1 and maternal BC-2. Egg production maternal lines-202.6 eggs per duck-laying. Output of ducklings – up to 80%. Live weight of broiler ducklings in 7-week age is 3.4 kg. 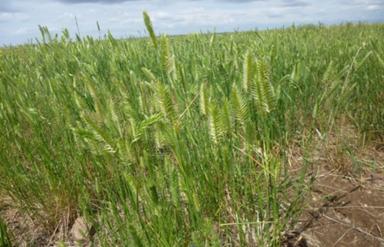